How To Make A Garden Gazebo 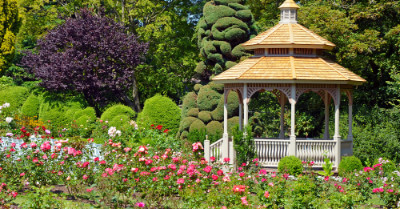 Wondering how to make a garden gazebo simply and cheap? Kits can easily run you about $3,000. So, to save money, the best choice is to build a DIY wood gazebo.

This article covers an eight-step process to building your own wooden gazebo for your landscape. We also discuss ways to customize your hardscape by adding some cool finishing touches. Then, for DIYers hoping to go all out, we go over how to create a base for your gazebo and four types of gazebo foundations and how to install each one.

I have no experience building gazebos. I’m just a great admirer of them who hopes to own my own home someday so I can finally own one in my own landscape. The following tips are based on my research on the subject. Let’s learn about building DIY gazebos together.

Please note that you must install your foundation before building your gazebo. However, I know you came here for this guide specifically. So, we’ll start there.

The easiest way to make a garden gazebo is by using a prefabricated kit. However, these DIY gazebo kits can run about $3,000. You can cut costs by building your own wood gazebo from scratch and still have it come out looking like it was installed by a professional.

You may need a little assistance to get the job done right. But you can do this if you believe you can. Just follow these step-by-step instructions to build a wooden gazebo for about one-third the price of using a DIY gazebo kit.

For the four corners, you need four large posts. Choose the size of your choice. But commonly the measurements chosen are 12 feet (length), four inches (height), four inches (width).

Grab six more of your beams and use them to brace the gazebo’s three closed sides. Place two on each side, vertically to the posts two inches from the bottom and top. Use two large bolts to secure the beams by placing them through the post and each beam’s center.

Fit the salvaged glass windows and wood centered within the three walls. Measure their width. Use one-inch by four-inch boards to create a window frame and nail it in place. Then, use nails to affix the window where you want it.

Now, it’s time to cut your upper beams. Grab four more beams that are about 8 feet by seven inches. Cut squares into one side of each beam that measures 2.5 inches by 3.5 inches by ¾ inch.

To attach the upper beams:

Using bolts, attach the flat sides of each short beam to the longer beam at each of the four corners:

Have your assistant hold the roof of the gazebo in place while you both each corner of it to the corner posts:

How to Make Your Garden Gazebo Look Awesome

Now, it’s time to add some finishing touches to improve the look and functionality of your garden gazebo:

One of the simplest things you can do to spruce up the look of your wood gazebo is adding a fresh coat of paint. You can paint it to match your home or add a splash of bold colors to create an accent piece for your landscape.

Be sure to use outdoor paint. This will ensure that it lasts longer throughout the seasons while protecting and prolonging the wood’s life.

Give your wood gazebo a unique look with a fiberglass or grooved aluminum roof. Use nails to secure it in place. Get even more creative and screw some awesome-looking hooks inside your angled roof beams. They should be about one inch from the bottom and top of each one.

Add some complimenting curtains inside the hardscape to act as walls. Just hang them on curtain rods and affix the rods to the tops of the structure so the curtains drape down when closed. Whenever you want a more open feel, just open the drapes and enjoy the view.

Now, it’s time to have some fun decorating your new DIY garden gazebo. Give it your own personal touches with hanging flower pots, window boxes, solar garden lights, a table and chairs, hammock, a small water feature or a bed. Your gazebo can be both functional and aesthetically pleasing with the right hardscapes and softscapes added to it.

Building a Base for Your DIY Gazebo

Really want to take the look and feel of your gazebo up another notch? Why not add a base to your structure, such as a concrete foundation? Here are the steps to building a gazebo base and tips on how to choose the best base for your gazebo:

Clean up the area where you plan to build your gazebo base. Make sure there’s no debris, weeds, rocks, grass, plant or tree roots. Clear a path no less than four feet from the perimeter of your future foundation.

For example, if your gazebo is 10 feet by 10 feet, which equals 100 square feet, make the center point of the foundation the middle of that 100-square-foot area.

Fill all holes within the area to level the ground. Use compacted soil to get the job done. If the location has many holes or is very uneven, you may want to call your assistant in again to help.

Now, it’s time to outline the area where you plan to build the gazebo base. Whether you’ve chosen to build a wood deck, concrete slab, brick paver patio stone or concrete footing foundation, this step is a must.

Use stakes to mark the four corners (for square bases) of your base. Then, tie strings around each stake, connecting them together to create a square. This marks the perimeter where you need to install the foundation you’ve chosen.

There are a variety of gazebo foundations that are both aesthetically pleasing and functional. What you choose may depend on how much back-breaking work you want to put into the DIY project, how much you want to spend or both.

A solid, strong gazebo base provides a quality structure to help keep your hardscapes intact for decades. Today, we’re discussing wood bases, patio stone bases, concrete slab bases and concrete footing bases. No matter which one you choose, you are adding a true foundation that will add years to the life of your gazebo.

Not sure which type of gazebo foundation is best for your needs? Well, here are three popular choices installed by DIY property owners:

A wooden deck will not only match your wood gazebo, but it will give the hardscape an organically appealing look. It’s a very cost-efficient way to build custom flooring for your gazebo.

How to Install a Wooden Deck Gazebo Foundation

Tip: It’s recommended that you use materials that can withstand many weather conditions, such as pressure-treated lumber or cedar.

Brick pavers make great foundations for gazebos in areas where there’s good drainage. After much research, I recommend pavers that are at least two inches thick and 12 inches by 24 inches in size.

You can also get super creative and use uniquely shaped patio stones. However, this DIY project won’t be as simple.

How to Install a Patio Pavers Stones Gazebo Foundation

When maintained properly, a concrete slab foundation will remain durable for decades. This is the most commonly recommended material for foundations because of its endurance and strength.

Make sure you give your concrete about 7-10 days to completely dry before installing your DIY gazebo on top of it. And keep in mind that this is grueling work. So, you may want to call your assistant to help you with this.

How to Install a Concrete Slab Gazebo Foundation

Love the look of concrete but laying a concrete slab is just not an option? A concrete footing just may be the best choice for you. This is the ideal gazebo foundation hardscape material when you don’t want to deal with getting a building permit or your ground is sloped or very uneven.

A footing allows you to raise your gazebo up off the ground, making it completely stable in uneven or inclined areas. They are also an excellent option for leveled areas where you just don’t want to install a concrete slab.

How to Install a Concrete Footings Gazebo Foundation

Kiesha Joseph is an avid gardener dedicated to simple urban gardening on a budget. She enjoys sharing her Zone 9B Inland Empire, California experiences, as well as inexpensive DIY landscaping techniques. She loves experimenting in the garden, even if the project seems to be a failure. According to her, she does not learn from her successes. She learns from her failures. And that’s why she is determined to keep experimenting.