Is It Cheaper To Build Your Own Gazebo? 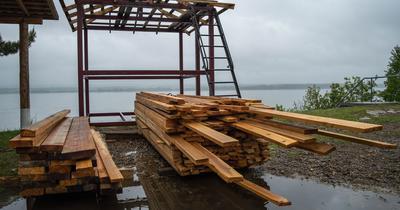 Is it cheaper to build your own gazebo, use a prefabricated kit or have this landscape hardscape professionally installed? The answer probably won't shock you.

It costs about one-third less to build a wooden gazebo from scratch than to install one using a prefabricated gazebo kit, which may run you about $3,000. Professional installations are even costlier, making a DIY gazebo build the most economical choice for creating this hardscape on your landscape.

In today’s article, we’ll discuss the differences in costs when deciding between using a prefabricated gazebo kit and building your own wooden gazebo from the ground up. I’ll also present you with a step-by-step guide to installing a DIY gazebo in your yard.

I’m definitely not an expert on building your own gazebo from scratch. But I did some research to help us both learn the easiest and cheapest way to get the job done.

‍Step-By-Step Guide to Building a DIY Gazebo from Scratch

There are three phases to building a wooden gazebo from the ground up:

Phase One: Build the Gazebo Walls

For this cheap DIY gazebo building project, we will be adding three walls with windows attached to them.

You need one post for each corner for a total of four. Choose the distance between them and the height that suits you. But the professional recommendation is 4-inch by 4-inch beams that are about 12 feet long.

Here are the steps to building the posts for your gazebo walls:

Now, it’s time to brace three of the sides to close them up. For this, you need six more beams that are 4-inch by 4-inch in diameter. Place two beams on each of the three sides perpendicular to the posts. They should be two inches from the top and bottom. Use two large bolts on each side to secure them by placing the bolts through each beam’s center.

To determine the distance you should place in between the two beams, first decide whether you’ll be installing windows or not. If you are, determine the windows’ dimensions by measuring their height. Then, simply add about 1 ½-inch and make that total the distance between each bracing beam.

You can go out and purchase windows for your gazebo. But it’s cheaper to salvage some old glass windows and wood. Mark their width as you fit them within the center of each one of the three walls. Use four boards that are 1-inch by 4-inch in diameter to create frames for each window. The height of the frame should match that of the windows.

Use nails to affix the frame into place. Then, nail each side of the windows to affix them in place onto the gazebo walls.

Now, it’s time to join the beams to the posts at the top. For this, you’ll need four beams that are 8 feet by 7 inches in diameter. Cut squares at each of the four beams’ ends that measure 3 1/2 -inch by 3 ½-inch by ¾-inch. Make these cuts on the same side of each one of the four beams, creating a half-lap splice joint.

Glue your upper beams together. Then, use 1-2 bolts placed into the posts through the square to affix them to the posts’ tops.

Every gazebo needs a roof. These are the steps to build a roof for your DIY gazebo.

To start, you will need five more beams that measure 4-inch by 4-inch:

Bolt the longer beam’s ends to the shorter beams’ flat side. Create triangles by joining the 8-foot by 7-inch beam between them. Be sure to take note of the 45-degree angles because the beams need to sit flat on top of the gazebo’s walls. Place each bolt no less than 1-inch apart.

Hold your roof steadily in place while bolting each end into the corner posts. The bolts should go into the posts but not come out the other side. So, make sure they are not too long.

To give your gazebo a more polished look, install windows within the triangles. But first, you need to install frames for the windows. Check to ensure the window will fit in the triangle of the roof. If so, measure the window frame’s height. Then, cut a 4-inch by 4-inch beam with the same height as the window for each one and affix it into place with bolts.

Now, it’s time to add your own personal touches to give your DIY gazebo some style. Just because it’s cheaper to build your own gazebo doesn’t mean it has to actually look cheap.

It’s time to cover your roof. Use materials fit to size, such as fiberglass or corrugated aluminum. Secure the roof covering in place using nails.

For a more stylish look, screw hooks on the inside of the gazebo about 1-inch from the bottom and top of each one of the angled roof beams. Add stretch cable in between each hook and add rodded-pocket curtains at the bottom and top to take the look of your covered roof over the top.

For the one open area where you didn’t install a wall, create a movable wall to act as a door to your gazebo. Install curtains on the gazebo’s inside right above the doorway. Leave it closed when the gazebo is not being used or you want privacy. Otherwise, simply tie the curtains back to the posts to keep your movable door open.

Add a coat of paint or two to the wooden areas of your hardscape. Use any color you like, whether it’s your favorite color, something that matches your home, or make it a strikingly gorgeous focal point for your garden by using a bright, bold color.

Remember that paint can prolong the life of your wooden structure by protecting it from outdoor elements. For an added level of protection, add a coat of stain as well.

There are numerous ways to personalize the structure. Hang string lights, flowerpots and pictures. Add a patio table and chairs. Place potted plants strategically inside the gazebo. Just let your imagination run wild.

Kiesha Joseph is an avid gardener dedicated to simple urban gardening on a budget. She enjoys sharing her Zone 9B Inland Empire, California experiences, as well as inexpensive DIY landscaping techniques. She loves experimenting in the garden, even if the project seems to be a failure. According to her, she does not learn from her successes. She learns from her failures. And that’s why she is determined to keep experimenting.