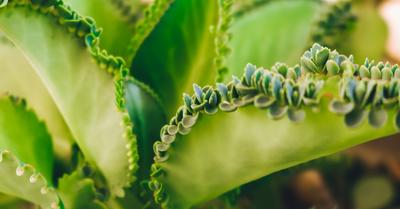 If you are wanting to grow the Mother of Thousands, then you need to know how to properly care for this plant in order to have a healthy, thriving plant.

When planting something that you are not familiar with, it is always important to educate yourself on the care and maintenance that is needed for that particular plant. By knowing what is needed, you can ensure that you have the environment and resources necessary to help the plant thrive for years to come.

To care for and grow the Mother of Thousands, it is important to know that it is an invasive species that is best grown indoors and away from pets and children due to its toxicity. It requires adequate sunlight, minimal watering, well draining soil, and mild temperatures to grow.

‍What Is a Mother of Thousands Plant?

Mother of thousands is a succulent and is otherwise known as Kalanchoe daigremontiana. It is a part of the Kalanchoe genus, which is part of the broader Crassulaceae family. It is a low maintenance houseplant that can be commonly referred to as the Devil’s Backbone, Mexican Hat Plant, and Alligator Plant .

The plant is native to the African island of Madagascar, but has been transported to many places all over the world. It can be an invasive species, so it is important to note that when planted outdoors you must keep a watchful eye on it. It will spread quickly due to its plantlets that will fall off and grow into a new plant. Many people prefer to keep it potted in order for it not to invade other species of plants in the same area.

It is unique in appearance due to the tiny plantlets that grow on the outside edges of the leaves, sometimes up to thousands per plant. It boasts large blue-green leaves that can grow up to 8 inches in length, with an overall plant height of up to 3 feet.

Mother of Thousands is considered a poisonous plant so it is important to be aware that it needs to be kept away from small children and pets if it is potted indoors. It contains the cardiac glycoside daigremontianum, which could potentially be fatal. Not only is the plant itself toxic, but the tiny plantlets that grow on the outside edges of the leaves are toxic as well. It is a good idea to put the plant on a windowsill or ledge that is out of reach except to the person that is caring for it.

How to Grow & Care For a Mother of Thousands Plant

Where Can a Mother of Thousands Grow?

Because it is native to a tropical region, the Mother of Thousands will grow best in warmer climates. It can be planted outdoors or potted as an indoor houseplant.

If planted outdoors, it will do best in USDA zones 9-11 due to the warmer climate. It is hardy in extremely warm temperatures, but cannot survive outdoors in cold climates and freezing temperatures. It will thrive in temperatures between 60 and 75 degrees fahrenheit.

If you live in a very cold climate and want to grow the Mother of Thousands, it is best to plant it in a pot and keep it indoors during the colder months. Once the weather warms up, it can be moved outdoors to a sunny location as long as it is done gradually.

As with many succulent plants, the Mother of Thousands will do best with ample sunlight. During warm months, it is best to put the plant in indirect sunlight. This will help the delicate leaves from sunburning and bleaching.

If the temperature is cooler where you live, then it can be put in direct sunlight for several hours during the day as the risk of sunburn is lower.

If you are planting outdoors and live in a warmer climate, plant the Mother of Thousands in a location where the plant will get plenty of indirect sunlight. When planting outdoors, if the temperature is going to get below 40 degrees fahrenheit, it would be best to transplant it to a pot for the winter season.

Once the winter season is over, if you plan to move the plant back outdoors, it is important to do so gradually. The plant will need to have limited morning sun and then gradually work up to more sunlight hours as it adjusts.

Best Soil for Mother of Thousands

The Mother of Thousands is considered a succulent and would do best being planted in a cactus soil mix. This mixture is more of a sandy texture, which will allow the best drainage.

If you cannot find the cactus soil mix, it is easy to create your own. You can simply mix some sand with regular potting soil. Unlike regular foliage plants, the Mother of Thousands does not do well in soil with organic matter such as peat moss and compost.

As a very drought-resistant plant, the Mother of Thousands does not require intensive watering. It is best to let the soil dry completely in between watering. On average it will need water every few days in the summer months and only requires a small amount of water to moisten the soil. You can feel the soil in between waterings to tell once it has thoroughly dried out and it is time to water. If the first two inches of soil are dry, then it is time to water the plant again.

Once the temperatures start to drop, you will only need to water once a week in the fall and then every couple of weeks in the winter months.

Mother of Thousands will not flower when grown indoors and rarely flowers outdoors either. However, if grown outdoors in a warmer climate it can potentially grow small tubular pink flowers in the later winter months. Following the flowering, the mother plant will die leaving behind the plantlets to continue to grow.

The Mother of Thousands does not require regular pruning, however, if it does start to grow quickly and appears wiry and spindly, then it might be time to prune.

The easiest way to prune the Mother of Thousands is to pinch the top of the plant directly above a large leaf. This will then encourage the plant to grow leaves further down the stem.

The plant is one of the easiest to propagate and has been referred to as self-propagating at times. It is a very simple process if you do want to propagate your Mother of Thousands.

You will simply remove a few of the plantlets from the outer edges of the leaves. After removing them, you can place them in a small pot with cactus soil. Be sure to spread them out about ½ inch apart and then lightly water the soil. Following this, put the pot in a location with a good amount of sunlight and continue to water as needed.

Once the plantlets have reached an inch or two in size, you can repot them in their own individual pots to continue to grow on their own. It is important to remember when repotting them that their roots are very delicate and you must be careful when moving them to a new pot.

Repotting the Mother of Thousands

The best time of year to repot a Mother of Thousands is during the Spring. You will want to wait for warmer weather in order to encourage growth of the plant in the new pot.

Choose a new pot that is about two inches larger than the old pot. Fill the new pot about ⅓ full with cactus soil. Carefully slide the plant from the old pot without damaging the roots. If the plant needs any dead or damaged roots pruned, this is the time to do so.

Place the plant into the new pot. You can then fill the rest of the pot with soil and push it down to compact it slightly. Once you have done this, you can slowly water the plant with room temperature water.

Once it has been successfully moved to the new pot, you can find a sunny location for the plant. By moving it to a location with ideal sunlight, it will encourage the plant to thrive and continue to grow into the new, larger pot.

When learning about the Mother of Thousands, it is easy to get confused with its family member, the Mother of Millions. However, they are not the same plant. There are key differences between the two that will help you tell them apart.

The last key difference between the two plants is that the Mother of Thousands will grow upwards in a single stalk towards the sunlight. The Mother of Millions will have several stalks that will grow from the same plant.