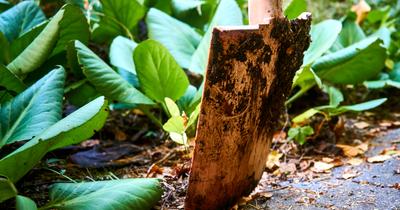 Adhesive and cohesive forces are important for the transportation of water from the roots to the leaves in plants. These two mechanisms work differently, so knowing how they work will help you best care for your plants.

Adhesion forces cause water and solid surfaces to stick, while cohesion causes water molecules to stick together, forming water droplets. Cohesive soils have a high degree of cohesive plasticity and strength. With soil adhesion, the soil layer at a given depth below the surface undergoes a shift.

The importance of knowing the effects of soil adhesion vs cohesion cannot be denied, especially if you want healthy plants. In this article, we will explain both of these mechanisms as well as the main difference between the two.

Growing your own plants is not just planting a seed in the soil and hoping that it grows. You need to know all about the different factors that play to ensure that your plants grow to be strong and healthy (and bear fruit). Therefore, with our years of experience (and our green thumbs) behind us, we're going to tell you all about soil adhesion and cohesion and how they differ.

Cohesive soils have a high degree of cohesive plasticity and strength. Electrostatic and electromagnetic attraction, primary valence bonding, cementation as well as adhesion are three important drivers of soil particle cohesion. The engineering behavior of soils is greatly influenced by the structure of clay in cohesive soil. The geometric arrangement of soil or mineral particles is determined by genetic, chemical, and mineralogical characteristics, as well as the soil's previous stress circumstances. It should also be noted that the soil structure is also influenced by interparticle force.

The mutual attraction between similar molecules that enables them to cling together is known as cohesion. The term can also be used in a broader meaning to describe something that remains consistent throughout, such as a tale or a lecture. Cohesion is distinguished by the fact that it happens between two similar substances.

When soil adhesion occurs, the soil layer at a given depth below the interface undergoes a dynamic shift, resulting in the appearance of the weakest plane. The adhesion phenomenon happens when the external adhesive force of soil on the structural surface is larger than the cohesive force. These soils stick to or move with the structure's surface, resulting in attached soil. Furthermore, because various materials have varying adhesion abilities, the quantity of soil adhesion on the surfaces following the interface separation varies.

Adhesion is the attraction between dissimilar molecules that causes them to stick together. The term can also apply to any clinging property in a broader meaning (for example, glues can be called adhesives). Adhesion is distinguished by the fact that it happens between two distinct substances. Water molecules, for example, stick to the plastic beaker at a higher level along the borders due to their adhesion.

Difference between Adhesion and Cohesion

An adhesive force holds two independent bodies together, while a cohesive force acts to hold molecules and atoms of a single body together. Both forces, however, are caused by the same fundamental properties of matter.

Surface tension in liquids, for example, is caused by cohesion, while a combination of adhesion and cohesion causes capillarity. The strong, cohesive interactions between the carbon atoms that make up a diamond give it its hardness. A number of factors determine friction between two solid bodies. It would not be wrong to say that the process of friction that occurs between two bodies is partly due to adhesion.

Intermolecular forces are forces imposed by molecules on one another that affect the macroscopic properties of the material in which the molecules are embedded. In nature, such forces can be either attractive or repulsive. Short-range forces, which operate when the centers of the molecules are separated by 3 angstroms that function at higher distances, are neatly classified into two types.

Soil is essential for the survival of life on the planet. Except for what is gathered from marine settings, nearly all of the food consumed by people is grown in the Earth's soils. Soils also offer humans fiber for paper and clothes, as well as fuelwood production and foundations for roads and buildings.

Soils also provide a substrate for attenuating pollutants and surplus water, groundwater recharging, and habitat for microbes and biota, among other services. Soils are also used in confectioneries, pesticides, inks, paints, makeup, and medications; clays are used in drilling muds, ceramics, and artwork and provide glossy finishes on a variety of paper products.

Cohesive and adhesive forces are not similar. Water molecules are an example of cohesion. Each water molecule has the potential to make four hydrogen bonds with its neighboring molecules. The high attraction between the molecules causes them to "stick together" or pull together.

Water molecules are considered to be attracted to one other than other molecules, resulting in the formation of droplets on surfaces. For example, when filling a container, dewdrops create a dome before pouring over the sides. Because of the surface tension created by cohesiveness, light things may float in water. Water striders, for example, are creatures that walk on water.

Solids, for example, have excellent cohesive qualities and do not adhere to the surfaces with which they come into contact. Gases, on the other hand, have a low cohesiveness. The characteristics of water are both cohesive and sticky. A sphere is formed when water molecules cling together. Cohesive forces are responsible for this.