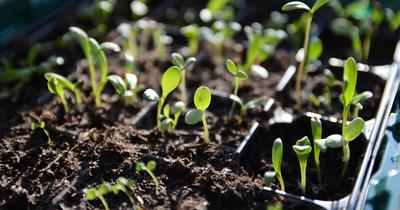 ‍If you're looking to build a farm garden, one of the first things you'll need to consider is going with soil blocks or trays for your plants.

Creating a garden in your home is not easy and involves a lot of planning. Ideally, you'll want to get it right the first time. If you mess things up at the very start, you'll have to deal with unhealthy soil and fruitless or flowerless plants.

If you are starting out indoors, then soil blocking will be your best bet. But there are a few things to consider first. Here, we will take a closer look at both of these popular methods used by those who want to start a farm garden in their home.

As gardening enthusiasts, we can provide you with all the information you need on using both of these options so that you can make a more informed decision.

Soil blocking mix is a specialty product that may be purchased for roughly the same price as potting mix or made at home using a tried-and-true recipe. In either case, the price is comparable to what you'd spend for a good seed starter or potting mix.

Germination rates appear to be equivalent to those seen in other planting media, hovering around 100%. Seedlings in soil blocks take the same amount of effort and time as seedlings started in other ways. On the other hand, blocks are best watered by sprinkling or flooding. Because the plant food is included in the blocking mix, soil blocks do not need to be fertilized after germination, which saves time.

Many trays are weak and can quickly shatter and degenerate from UV radiation if not properly cared for. More durable propagation trays are well worth the money, but they may easily cost $15 per tray. When you're starting out with thousands of seedlings, the expense might quickly add up.

It may seem counterintuitive to utilize dirt to compact into a little block for seedling roots. That's why you don't just use any old potting soil; you may buy particular soil mixtures or manufacture your own using formulas. The key difference is the quantity of perlite in the seed starting mix and soil blocking mix.

Perlite is required for soil blockage. In order for the fragile new roots to flourish and for some oxygen to be present in the soil to prevent an anaerobic environment that can lead to illness, the soil will not be fluffy. This is where perlite will be required. This will allow the soil to drain and those little roots to enter and grow within the soil block.

Soil blockers come in two sizes that are excellent for household gardens. Mini-blockers make half-inch blocks, which are perfect for small seeds that require time and/or temperature to grow. Standard dirt blockers create two-inch blocks that may be used for nearly anything else. They work well together, especially with plugs that allow the mini-blocks to be 'potted up' into larger soil blocks, simplifying life. One giant blocker, one mini-blocker, and a pair of mini-inserts are included in the Block Collection so that your blockers may work together effortlessly.

Twenty half-inch dirt blocks are created with mini-blockers. This size is ideal for growing small seeds (such as oregano), seeds that take a long time to germinate (such as lavender), and/or heat-loving seeds (like peppers). Because mini-blockers are so much smaller than giant blocks or cell trays, they perfectly utilize the limited and valuable area on your heat mat. The germination rate is higher and faster when seeds are that near to the heat mat.

Mini-blocks may also be potted up or nestled into giant blocks using simple plugs ('mini inserts) that adhere to the large soil blocker and provide ideal indentations for your mini-blocks to plant up or nest into. Once the seeds in your mini-blocks have germinated, pot them up onto bigger soil blocks or pots.

With a soil block, even plants that don't fare well when transplanted can thrive. The concept is that the air prunes the roots. The roots cease developing once they contact the air unless the plants are transferred into the garden or moved up to the next size soil block. This keeps the plant from becoming root-bound (which most varieties are sensitive to becoming root-bound).

Because the plant isn't root bound, the roots don't need to be interfered with when it's time to transplant. This reduces transplant shock, allowing your plants to continue to develop without missing a beat. Transplanting from propagation trays, on the other hand, may put the plant's growth back for weeks.

It goes without saying that plastic is used extensively in flower farming, from greenhouse plastic to row coverings to drip tapes. However, the best option to reduce plastic usage is to utilize soil bricks. Many of the low-cost propagation trays may warp and split in the sun, so you'll be lucky to get a year or two out of one if you're careful.

Soil blockers won't degrade in the sun, and you may even steer clear from the plastic when choosing which trays to use! We've used old cookie sheets or, more recently, biodegradable lunch trays, with the concept that they'll be used once and then composted when it's time to plant out.

It should be noted that the soil block mix should be wetter than you're used to. When beginning to seed in trays, the soil should be wet like a sponge. That's far too dry to cause soil blockage. There is still a delicate balance to be struck. It will not form a block if the mixture is too moist. The block will crumble if it becomes too dry.

Tossing soil to the side of a shed is a fun technique to see whether your ratios are accurate! It's too moist if it runs down when you throw it. It's too dry if you throw it and it doesn't stick if you combine it with the other ingredients.

A Potting Tray is a must-have garden item for some farmers. It's a lightweight, portable tray that can be used almost anywhere you need a place to plant seeds, take cuttings, pot up, or prick out. The primary function of a Potting Tray is to keep compost contained while you work; this is why well-made potting trays always have higher sides to prevent the compost from falling out.

Nursery trays are commonly used by commercial growers to generate seedlings for planting. As compared to the other option, which is direct planting, it is much easier to take seedlings from the tray for transfer when planting in the field. Additionally, seedlings from the seedling tray may be used for manual or automatic sowing machines, reducing the time spent checking the quality of seedlings.

Transplanting offers several advantages over direct sowing, yet some vegetables are better suited to transplanting than others. Peas, sweet corn, and beans, for example, are not commonly cultivated as transplants. A batch of seedling trays must be purchased, increasing the investment cost.

Seed trays are an excellent way to start germinating your seeds before the earth in your garden is ready for planting. This is especially beneficial in locations with a short growing season and a protracted cold-weather season. It allows you to grow items you wouldn't typically be able to plant, in addition to getting a jump start on your usual garden favorites.

If your summer season is short, for example, you might not be able to cultivate jalapeño peppers. However, if you start them early in seed trays and transfer them after they've developed into little plants, you'll have a better chance of success.

Seed trays help you save money because, as the name suggests, they allow you to grow your plants from seed, which is far less expensive than buying a fully developed plant. A bag of seeds can cost roughly $4 depending on what you're planting, yet each little plant can easily cost the same. The main difference is that the seed packet has the ability to produce dozens, if not hundreds, of your favorite crop for a very low initial cost.