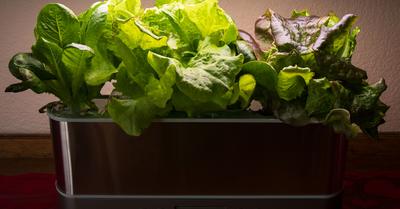 ‍If you have any interest in gardening, you might be wondering about the difference between soil and aquaponics.

Aquaponics uses about 90% less water than processes that involve soil, and the plants grown in aquaponics did so 11% faster than those grown in soil. Aquaponically-grown plants are also proven to be much healthier than soil-grown plants.

Since aquaponics is relatively new, there is a lot of discussions around whether it is truly healthy or not, and how it works. Many people are wary of it, while others embrace it.

In this article, we’ve put together information from various sources to explain what the difference is between soil and aquaponics, and which is better.

Aquaponics is a system of farming that relies on symbiotic relationships between plants, and fish from aquacultures. Symbiotic relationships are those where both parties rely on each other and complement each other’s flaws to coexist in harmony. In aquaponics, for example, plants need nutrients that they wouldn’t be able to find in pure water, and fish need water where the water is not murky and full of waste products.

By combining these systems, the plants take up all the nutrients in the murky water thus cleaning it out for the fish, and the fish produce the nutrients as waste to give to the plants. What you get is a farming system that is running itself.

There are enormous benefits to aquaponics. For one, the system essentially runs in a loop, which means that you need to give less input and there are very few waste products. This makes aquaponics great in terms of economy and ecology.

Aquaponics are much more water-efficient, taking up about 90% less water than soil farms with 10x as much productivity all in significantly less space too. Since aquaponics farms are not close to the ground, they’re relatively less susceptible to attacks from insects and other pests.

On top of that, raising fish and plants in the same environment pushes up the total income for the farmers and improves their profit margins without taking much extra input.

Though aquaponics seem appealing, there are some drawbacks to the system as well, just like there are for any other system. For one, only a few crops can be grown using aquaponics. This can be limiting since farmers may not be able to afford all these crops, and they may not be suitable for the community’s demand.

The most significant downside to aquaponics is the cost associated with them. For an aquaponic farm to function properly, they have to be professionally installed, which can be costly, and they also need a large amount of electricity to maintain them once they’ve been set up. Fish tanks have to be kept at a specific temperature constantly, and this requires electricity.

Water pumps that keep the water cycling between the plant and fish tank also take up a lot of electricity. This means that aquaponics is not the best choice for farmers who may not have access to a reliable source of electricity, or who simply cannot afford to pay for it.

What is Soil Farming?

Having looked at aquaponics, let’s look at soil farming now. Research shows that one teaspoon of healthy soil may contain as many as 1 billion microorganisms. Microorganisms are extremely important for soil fertility, availability of nutrients, the pH level of the soil, porosity, even moisture! Without microorganisms, your plants may very well be unable to survive.

Soil farming involves growing crops in the soil – which is what we usually think of when we say ‘farming’. We plant a seed into the ground and nurture it until it’s fully grown, and when it’s ready for sale or eating, we harvest it.

Why Use Soil Farming?

To combat the largest downside of aquaponics, soil farming is very low-cost and easy to set up. You don’t need a professional to set anything up, and there’s no need for constant streams of electricity to run the farm.

Crops of all kinds can also grow in soil, provided that the conditions in the environment and within the soil are favorable. This results in diversification of income for farmers since they can set up different kinds of crops within the same farm and earn profits.

On top of that, soil-grown plants often turn out to be more resilient than aquaponics-grown plants, because growing in the soil comes with more environmental challenges that require the plants to adapt to them. In fact, some studies suggest that the metabolites that plants produce when under duress are beneficial to humans, giving them an edge over aquaponics-grown plants.

Despite the benefits of soil-grown plants, there are plenty of concerns too. For one thing, soil farms are subject to environmental conditions, and poor conditions can destroy the crops growth outdoors.

Since more land is needed to grow the same amount of crops than in aquaponics, soil farming also has a lower output per unit of land, which can be a problem since many farmers do not have access to the required amount of land.

Additionally, since soil farming involves plants being in the soil, farmers have to deal with issues like pests and insects regularly to keep the plants from being eaten up or destroyed. This can take up a lot of time and money since there is usually a large expense in the form of pesticides and other ways to avoid these issues.

So What Do You Pick?

The best option would be to go for a hybrid system that involves both traditional farming and aquaponics farming. This would still depend on the availability of capital and access to land, but at the bottom line: there is likely no ‘better’ solution. Both of these systems have a fair set of advantages and disadvantages.